Once a widely staged performance during the Hungry Ghost Festival, the public is slowly abandoning the Teochew puppetry and opera in favour of modern-day song and dance. But performer Ling Goh is determined to preserve and perpetuate this vanishing art. 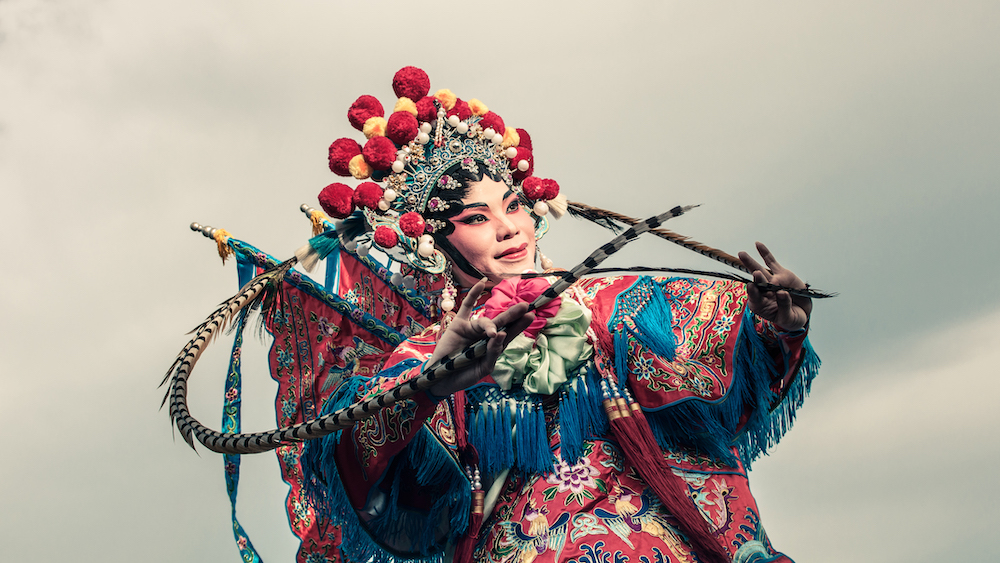 As a child, Ling Goh remembers watching her mother putting on grand dresses, headgears and elaborate make-up, and stepping onstage before an eager crowd. The backstage was her playground and her classroom – it was the place where she learned and mastered the intricacies of iron-rod puppet manipulation as well as the nuances of each character in Teochew opera. 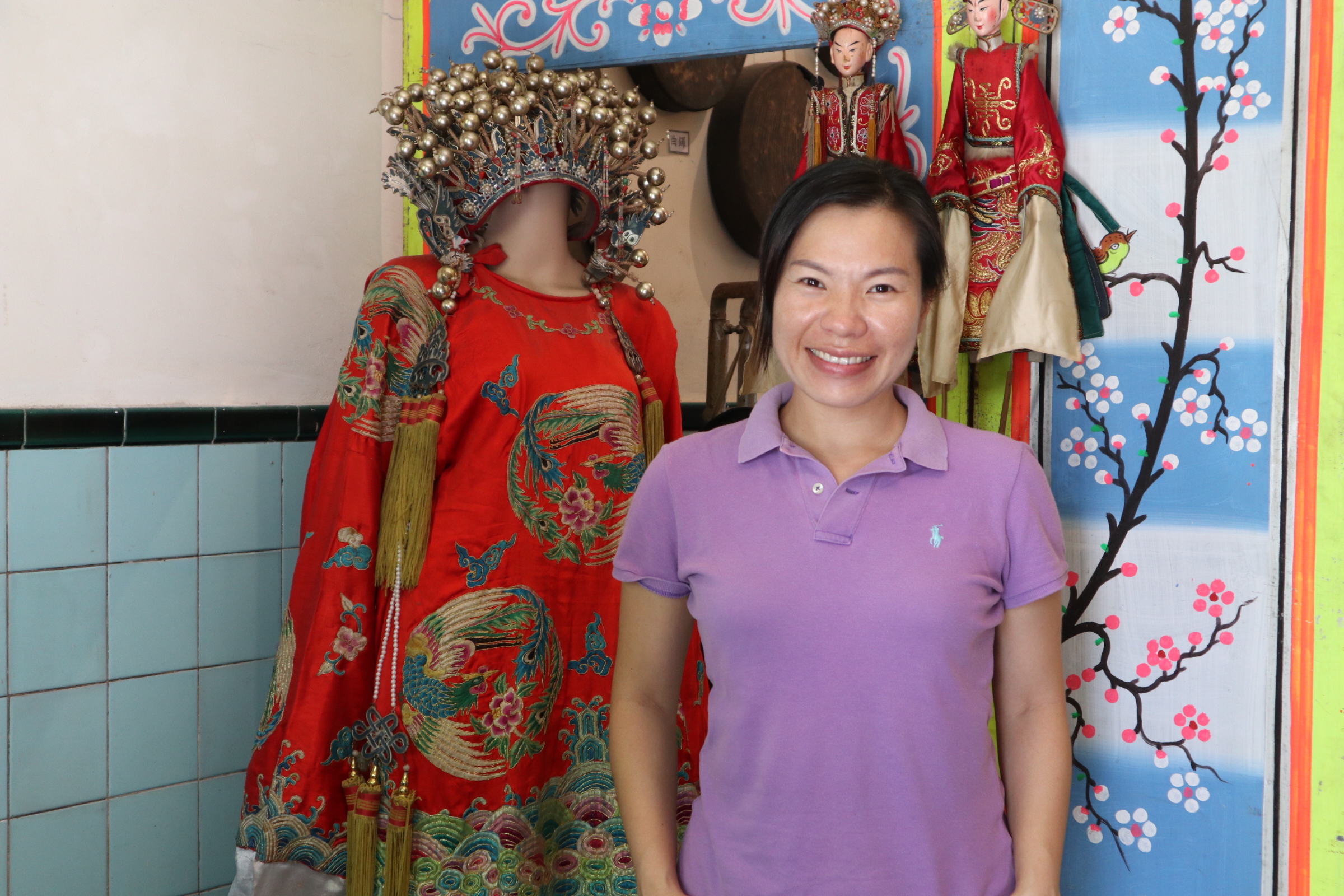 ﻿
﻿Ling Goh posed for a photograph when met at the opera house-cum-museum.

Ling Goh is the daughter of Toh Ai Hwa, founder of the now-defunct Kim Giak Low Choon Puppet Troupe which was recognised as a Living Heritage Treasure by the Penang Heritage Trust. Descended from an unbroken line of opera performers stretching back to the 19th century, Ling was exposed to the rich operatic world of Teochew puppetry and opera since young.

﻿According to Ling Goh, Teochew puppetry originated as two-dimensional shadow puppets in the Central Plain of China.

﻿“It is similar to the local wayang kulit. It is made of dried leather strips and controlled by three long iron rods attached to the arms and torso. These were only two-dimensional shadow puppets.

﻿“Then, during the Southern Song period, refugees fleeing south away from barbarian invasions brought the art to Chaoshan, a city in the eastern Guangdong province of China. The people of Chaoshan speak the Teochew dialect. It was in the Chaoshan region during the Qing dynasty that shadow puppets evolved into three-dimensional iron-rod puppets.

﻿“The Teochew three-dimensional iron-rod puppets then paved the way for the creation of the Teochew opera that we have today. Back then, Teochew puppet performers wanted to transform the iron-rod puppets into larger-than-life characters. Instead of merely using their hands to manipulate the puppets, they decided to be the puppets!” Ling Goh says. 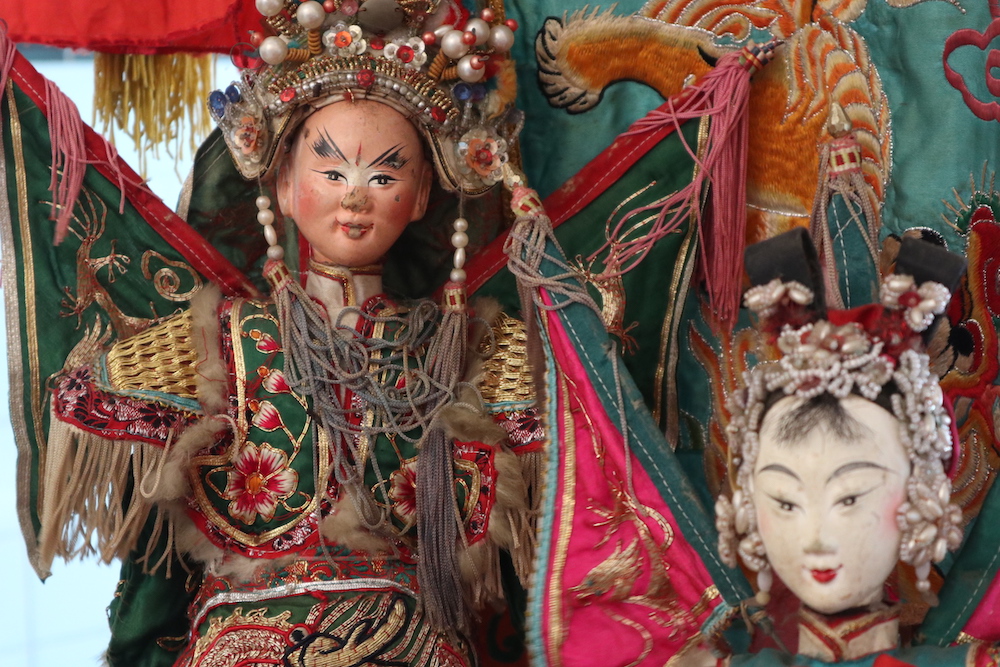 According to Ling Goh, the stories derived from popular local lore includes romance tales and ghost stories from the Ming, Tang and Qing dynasties. Meanwhile, the grand costumes and elaborate stage make-up are the trademarks of classic Teochew opera. “When you perform on stage, you want to stand out. The make-up brings out facial expressions. Without make-up, audiences cannot immerse themselves in the experience of the opera.

﻿“Same goes for the elaborate headgears and grand dresses. They are meant to improve the audience’s visual experience and to create strong, visceral scenes,” she says.

﻿In Teochew opera, the female characters are the Tragic Woman, the Noblewoman, the Maidservant, the Valkyrie, the Old Woman and the Matchmaker, and can be identified by the scalloped hairline on their foreheads.

﻿The male characters comprise the Young Man, the Old Man, the Fighter and the Comic.

﻿The Fool injects comedy into the story. A male Fool is recognisable by a distinctive white patch around the eyes and nose, while female Fools wear make-up to exaggerate their features for comic effect. 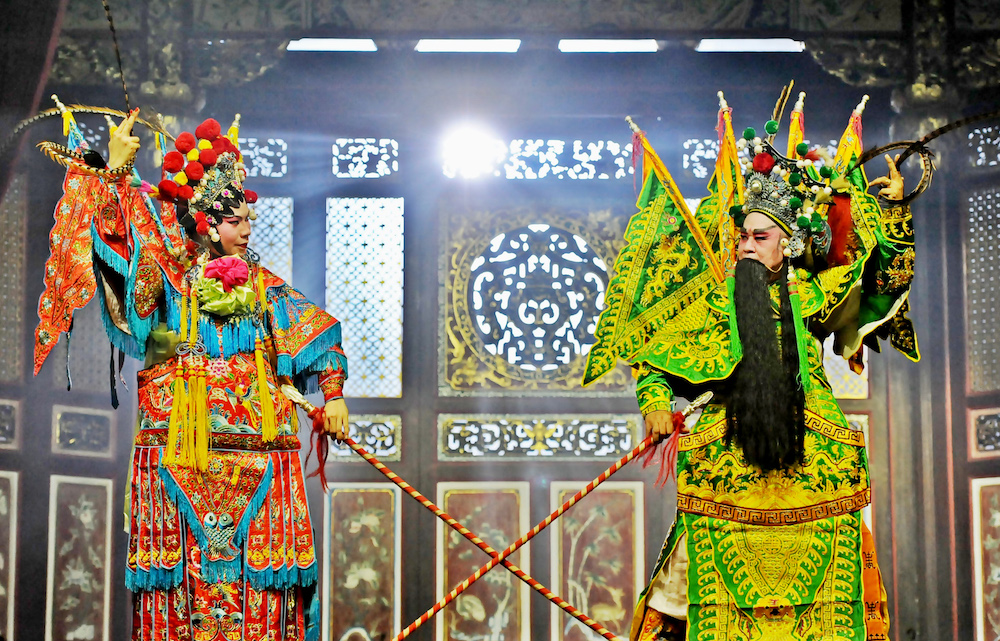 ﻿
﻿Ling Goh and her co-star during a live performance. Photo Credit Ling Goh.

﻿Interest in this classical Chinese performing art has waned in recent years. “People somehow think that Teochew opera is performed for the gods and ghosts. That’s not true. It has always been for the human audience.

﻿“I believe people today are more interested in Western, Korean and Japanese entertainment. They think Teochew opera is lau beh (outdated). They have no patience to learn and understand the cultural values in Teochew opera,” she says. 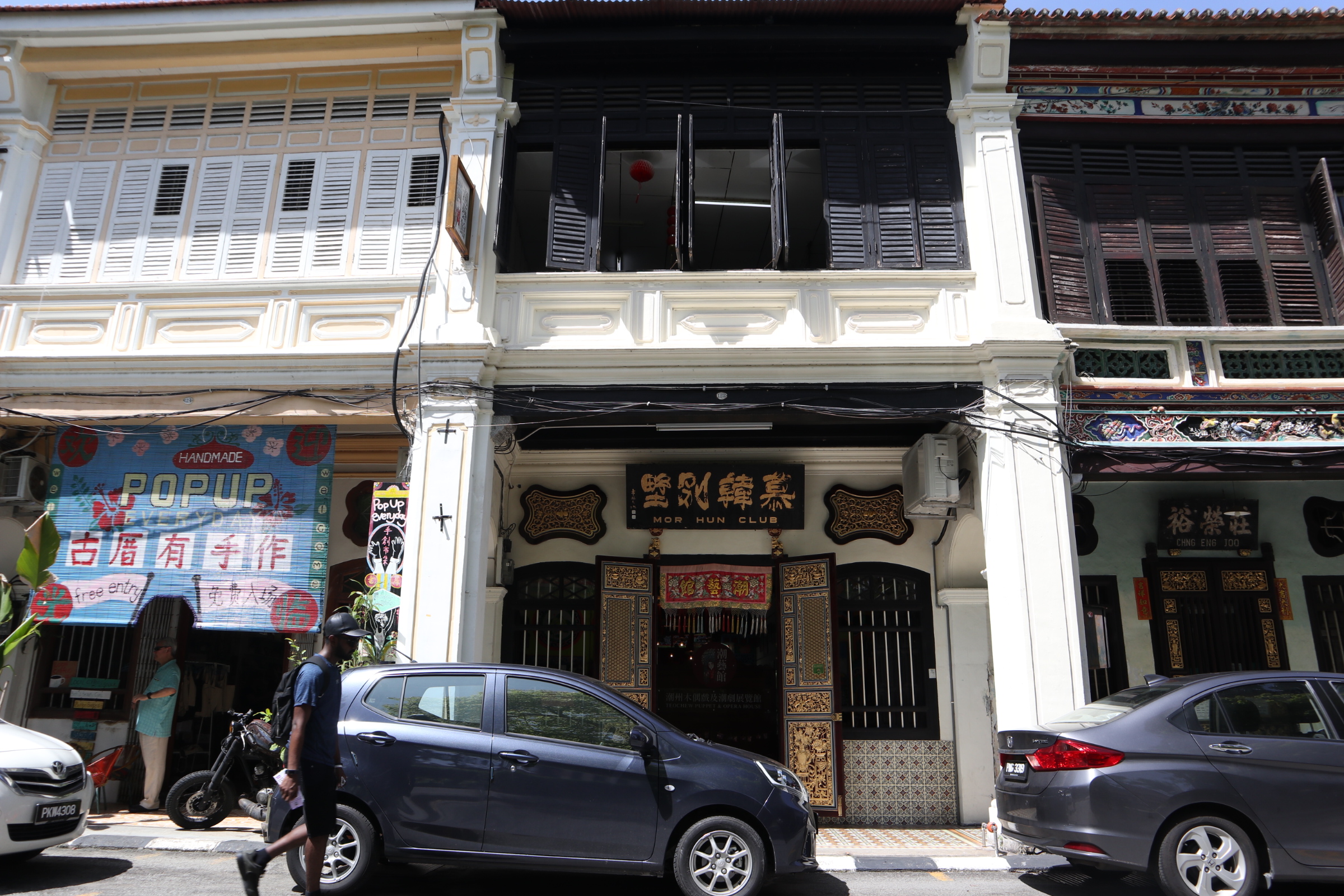 ﻿Refusing to fade into the background, Ling Goh continues to perform at cultural festivals in Penang, China, Singapore and London. In 2014 she founded the Teochew Puppet & Opera House at Lebuh Armenian – the first of its kind in Malaysia.

﻿The old-style Penang house with its long, narrow architecture and a central atrium contains exhibits of Teochew iron-rod puppets as well as costumes and props from life-size Teochew opera live performances. Visitors may also try on authentic opera costumes and try their hand at manipulating the unique iron-rod puppets.

﻿There are old manuscripts of operas as well as many puppets, musical instruments, assorted puppet accessories and costumes used in life-size operas. This is a glimpse into an ancient art that is fast disappearing – skills that have passed down through the generations.

﻿Though it is primarily an exhibition space, the Teochew Puppet & Opera House still occasionally holds opera performances, talks and workshops within the premises after hours. But mostly, it serves to tell the story of a remarkable family of opera performers over five generations. 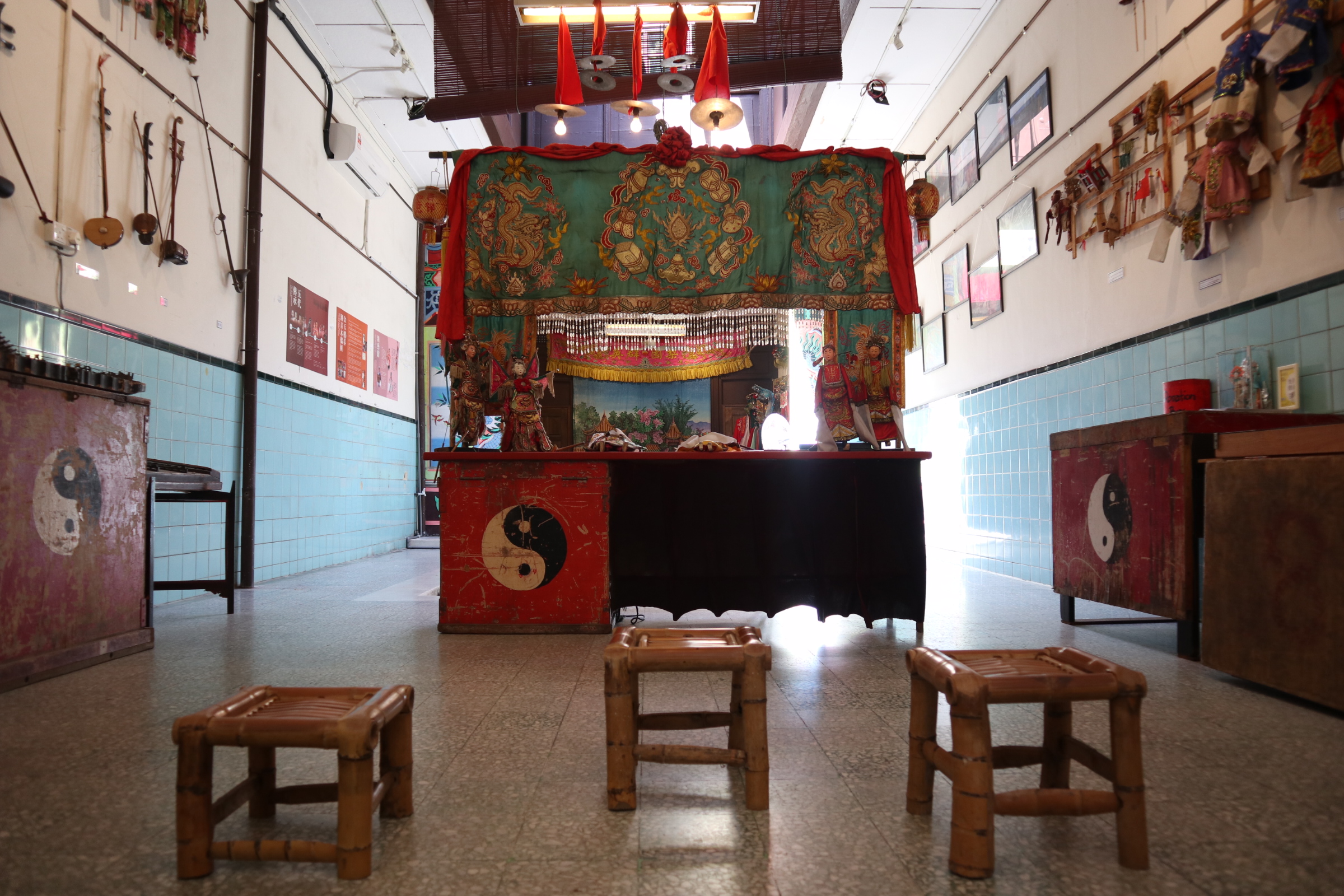 ﻿
﻿The Teochew Puppet Show Stage inside the opera house-cum-museum.

Find Teochew Puppet & Opera House at 122 Lebuh Armenian. The opera house-cum-museum is open from Tuesdays to Sundays from 10am to 5pm and can be contacted at +604 262 0377 or via email teochewoperahouse@gmail.com. Entrance fee is RM10 per entry. Log on to its website at www.teochewpuppet.com for more details or visit its Facebook page for details.