George Town has been experiencing a street art catharsis for a while now. Ernest Zacharevic may be the poster child for Penang’s street art scene, but fellow artist Thomas Powell has garnered a cult following with his fresh take on the classic Chinese Zodiac and Chinese opera performers – here on the old walls of George Town. 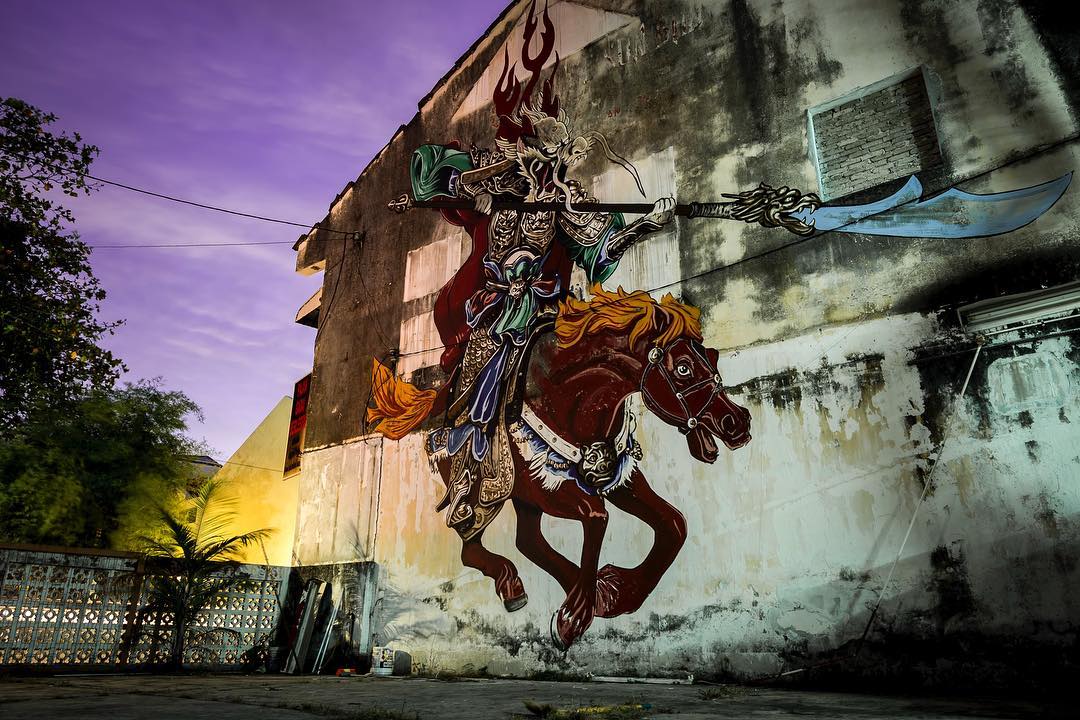 Have you seen the rat-headed prisoner on the wall of Mugshot Cafe on Lebuh Chulia? How about a monkey-headed general guarding the moon gate in China House’s courtyard?

There’s a dragon-headed General Guan Yu riding a horse on the wall of the Drippin’ Dragon Hostel on Lorong Hutton. Have you seen that too?

If you’re familiar with the works of Penang-based British artist Thomas Powell, you may very well have. 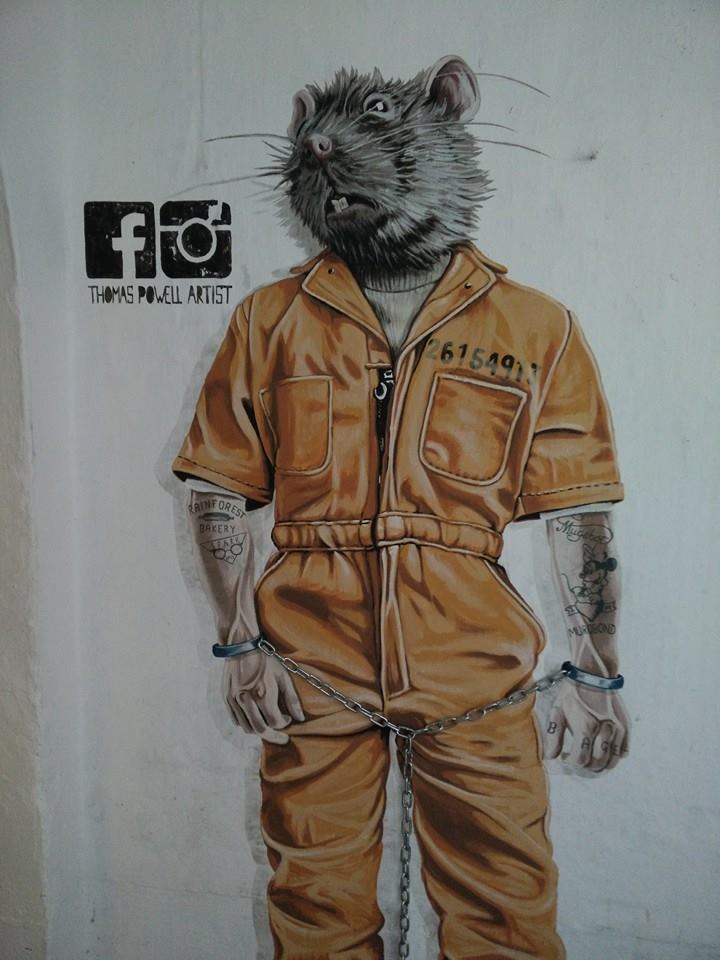 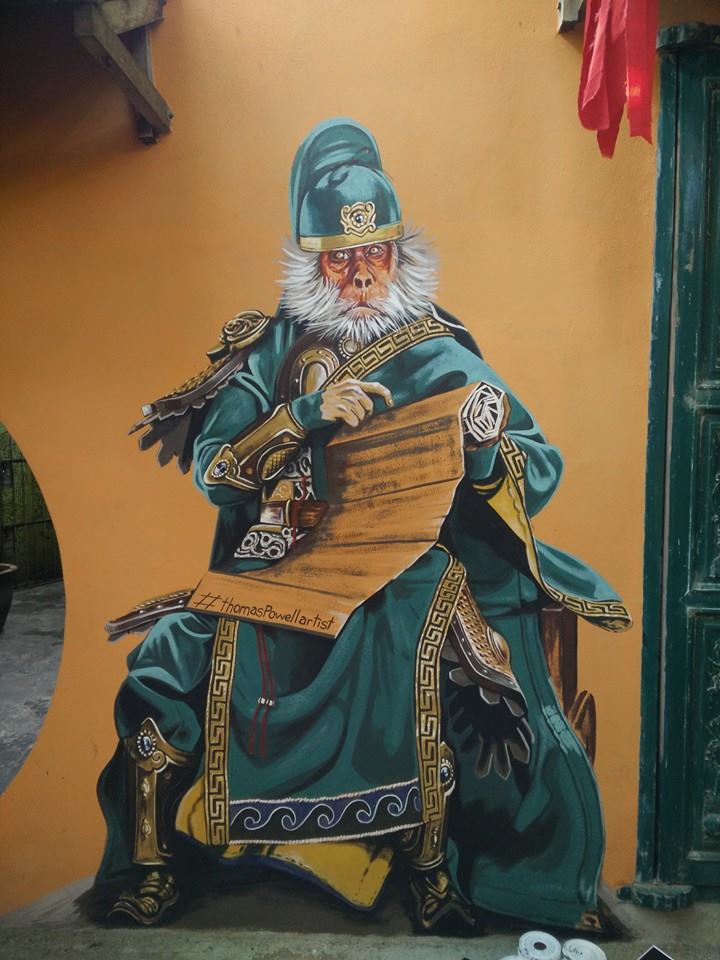 (From left) The rat-headed prisoner mural on the wall of Mugshot Cafe on Lebuh Chulia and the monkey-headed general guarding the moon gate in China House’s courtyard.

Known for his signature style of joining a representational head of an animal with a human body, Powell’s paintings and murals are instantly recognisable in the Penang street art scene.

These murals are an extension of Powell’s original Chinese Zodiac series which began in 2014. 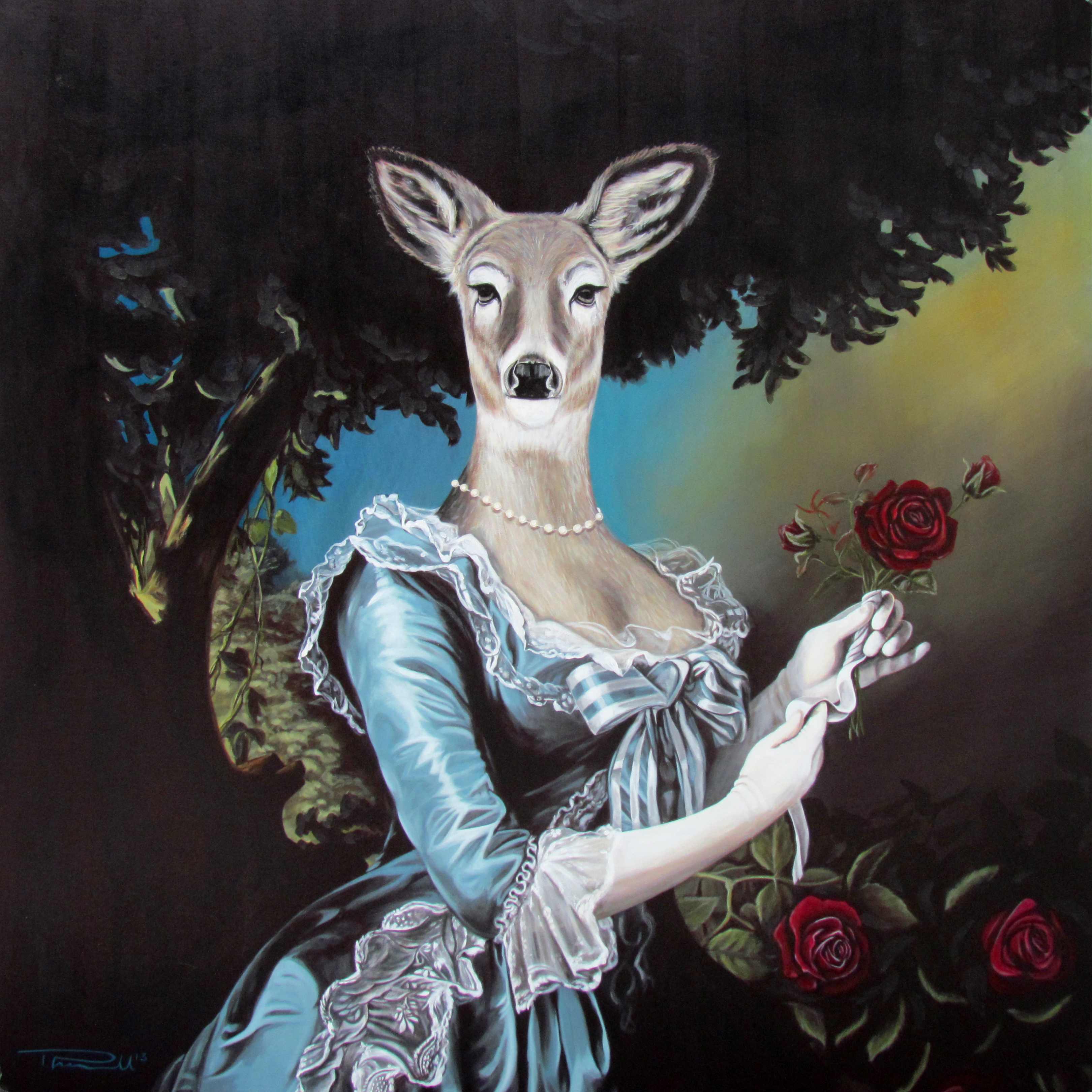 (From left) The Yes My Deer and Oh My Deer paintings in Macalister Mansion which sparked the creation of the Chinese Zodiac series.

“I got the idea during a project for Macalister Mansion. At that time, I was painting a pair of deer-headed pieces when it hit me: because all the 12 animals of the Chinese zodiac are meant to represent people, why not draw an animal head on a human body, symbolising what the creature represents? It enables viewers to recognise their own zodiac animal and explore what this means to them,” says Powell.

The Chinese zodiac or horoscope, which is based on a 12-year cycle, was used to aid many of life’s important decisions, from marriage to the setting up of one’s business. It was, and in some cases is still thought to be so accurate that at one time, an Emperor of China banned its use by the populace, fearing that it could be used to plot against him and his court.

Speaking about the Drippin’ Dragon mural, Powell says, “I painted it because the site used to be a hospice for people to spend their remaining time and had been empty for many years due to superstition and bad fengshui.

“The new renters felt the piece was needed to help change the fengshui of the place,” Powell says.

Powell is no stranger to the local street art scene, having been in Penang since 2010. When asked about how he stumbled upon his artistic journey in Penang, he says, “Joe Sidek, the former festival director of George Town Festival, stopped me and my friend, James Springer (author of Malaysia’s Canvas) on the streets and told us of a project that we may be able to help him with. Joe then introduced me to Fuan Wong, a glass artist, and Howard Tan, a photographer, and I subsequently got connected to the artist residency programme at Malihom Private Estate in Balik Pulau.”

When Zacharevic’s famed Children on a Bicycle mural was defaced back in 2015, Powell restored it lovingly without charge. “I was asked if I could help restore the mural. The piece is synonymous with Penang. It is appreciated by tourists and Penangites alike.

“It also meant I was able to help out Ernest, Joe, the chief minister and of course, the people of Penang in one act. It was the least I could do!” he says.

For Powell,  the overlap of culture makes Penang truly an incredible place, and the diversity adds to its attractiveness. “Different people with different cultures living and working harmoniously together offer a range of benefits for all to share, such as food, fashion, celebrations and festivals throughout the year. Penang has influenced me as an artist and as an individual,” Powell says. 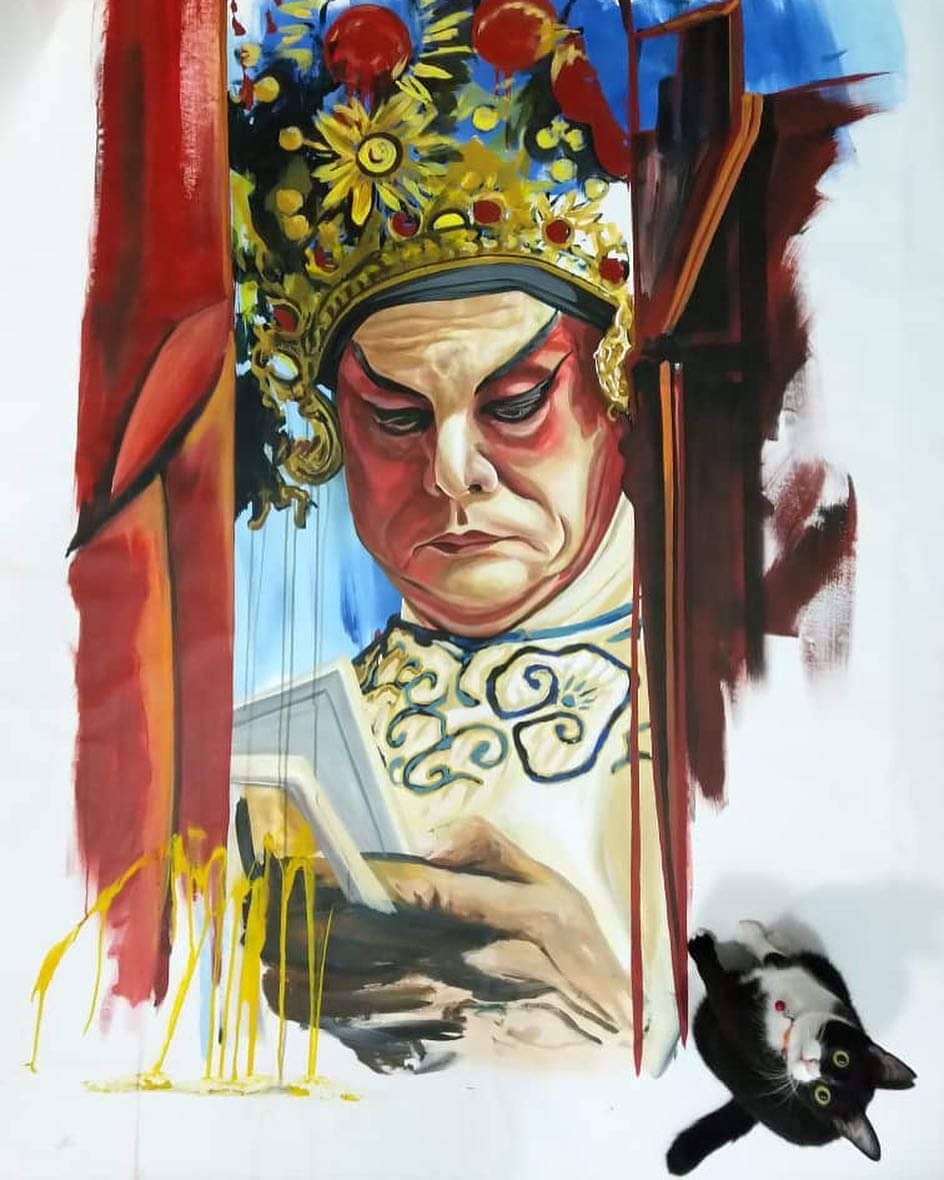 Since 2016 Powell has taken an interest in another aspect of Penang’s cultural heritage: the Chinese opera performers. Calling them his muses, Powell has painted another series, aptly named “The Sheng”, a term for the main male role in Chinese operas.

Powell was commissioned to install his murals at the Butterworth Fringe Festival and in Penang Hill.

At the moment, Powell has a string of projects coming up. “Next year I will be doing a mural trail around Little India, but it is yet to be confirmed.

“A local publisher has contacted me to do a book compilation of the Chinese Zodiac, which I am excited to work on. It will be a complete collection of the series.

“Twelve animals, 12 years, 12 unique characters and several thousand years of antiquity – all in one book. I'm excited about that!” he says. 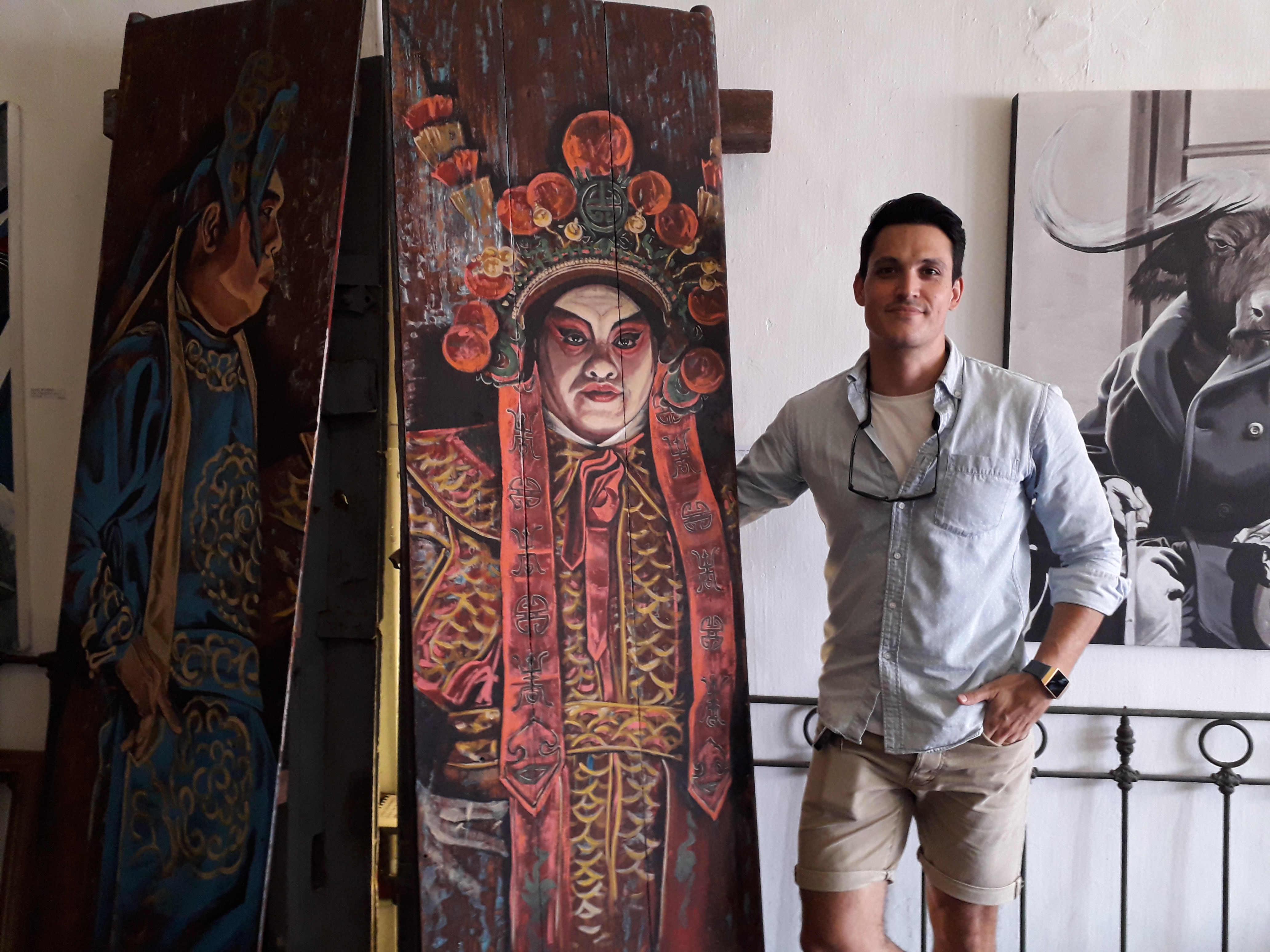 Powell posed for a photo at his art gallery.

Find Thomas Powell’s art gallery, along with Howard Tan’s studio and Fuan Wong's glass gallery, at 13 Lebuh Armenian. The art gallery is open daily from 10am to 6pm and can be contacted at +6016 773 4763.